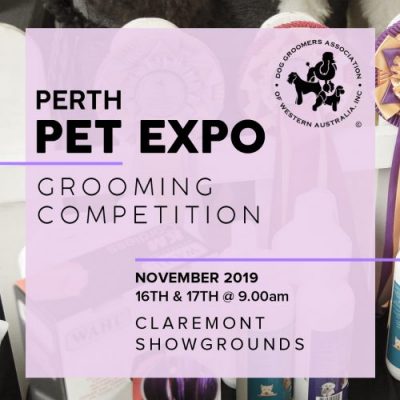 Join us for 2 Days of competitions at the Perth Pet Expo this November 16-17.

Creating a rewarding career from a passion is the ultimate dream and one that Melanie Newman has been able to pursue for over fifteen years. Starting out as a dog bather at a friend’s salon in the late 1990’s, Melanie relished the time she spent with the animals and decided to turn her passion into a lifestyle.

Melanie’s work has taken her to grooming competitions across Australia and New Zealand, Holland, Germany, Spain, Italy and various parts of America, and she was crowned the Australian Royal Supreme Grooming Champion in 2013. Among her other accolades, Melanie has won best in shows with Miniature Poodles, Standard Poodles, Bichon’s and Welsh Terriers.

Mel has taken on the role of Victorian Assessor for International Grooming Company and has been a grooming instructor for the Victorian College of Dog Grooming.

Mel represented Groom Team Australia in Barcelona Spain in 2013 , Milan, Italy in 2015 and Kortrijk , Belgium 2017. In November 2017 Mel competed at the Artero Grand Slam competition in Barcelona , Spain where she competed against 400+ groomers from around the world and won Best In Show , She is the only Australian groomer to win a Best In Show in Europe.

Steve Warry is an all breed judge and is lisenced to judge champion shows with the Australian National Kennel Club.

Steve currently owns and shows English Springer Spaniels, Lowchens and whippets and has owned/bred/shown 95 champions. We are privileged to have him judging again for our association.